When I was still in college, two different adults in my life, (a doctor from our church and my girlfriend’s dad) told me that I should purchase crown land. I was kind of thinking that they were not really aware of my reality because I was paying my own way through school, owned a car and had zero disposable income.

One day a classmate and myself got talking about “what if” we went in on it together and the next thing I knew I was half owner of a waterfront property with no road, no electricity and an agreement that a building was to be completed in 24 months or else the government would take back the property and keep our money.

People would ask me how long I expected the building project to take and of course I had NO idea but I would tell them I was guessing “two months”.Bob Laing

As soon as exams were over, on April 24, 1970, I moved into a tent on the property and started digging for the foundations with a pic-axe and a shovel and a lot of youthful determination and high hopes, working all the daylight hours, 7 days a week. People would ask me how long I expected the building project to take and of course I had NO idea but I would tell them I was guessing “2 months”.

At two months I had only finished digging the holes for the foundation. My classmate had a job through the week so he would come on weekends (driving my car) and would sometimes bring other friends who would help out. It was handy having more people to lift the walls into place that I had spent the week building (without the aid of any power tools).

Mid summer I got a “dear John” letter from my girlfriend (for whom I thought I was building this place) but not long after I met my neighbour’s nursing-school room-mate (when she was trespassing on my property to meet my other neighbour) and three years later we were married. In time there came two children and a dog who share our love of cottage living. (All is well that ends well)

It turned out that the last shingle went on the roof of a two storey building on September 14, 1970 but that was only a skeleton (shell) and it took many years before we developed it into what is now our year-round home.

A couple of years later, my class mate wanted to sell his interest in the property so basically, I changed partners. 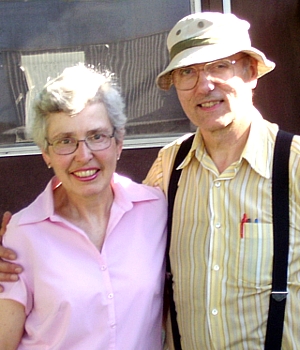 We became totally addicted to the pure northern air and the country atmosphere and to feed this addiction, we drove here from Toronto 52 times a year for 25 years before moving here full time in 2001. This move was a little ahead of schedule but it became necessary so we could do the elder care for my mother after she suffered a heart attack at the age of 89. The doctors told us that she would not make it through the night but the country air proved to be good for my mother too and she lived another 6.5 years to the ripe old age of 95 and loved every minute of her time here with us on the lake, in the forest.

In 1978, we purchased the property across the cove where Happynest now stands and began to develop it with assistance from a series of amazing student helpers who would spend their summers with us, sharing our table and our family life and helping out with projects and looking after the needs of our tenants. As time went on, our property grew a sauna, garage, boat house, barn and then a granny flat.

Our exceptionally talented student helpers became part of our extended family and we enjoy a close bond with all of them to this day even though they are spread all over North America now. We especially enjoy it when they come to visit and bring their families.

If you said that we are totally nuts about cottage living, you would be 100% correct..Bob Laing

It is an unusual way to meet people but some of our best friends now are the parents of our student helpers – not that surprising since, in a way, we were co-parenting with them for part of each year.

Some of our repeat customers have become best friends with us as well and of course we have long-time friends on the lake who have shared our pioneer experience too as we were all building at the same time back in 1970 and developing our little community going through thick and thin together.

If you said that we are totally nuts about cottage living, you would be 100% correct. We absolutely love everything about being here and we love to share it with others who grow to appreciate the natural wonders almost as much as we do.

We hope that you will give us the chance to show you why we think this is the best place on earth to soak up the special unspoiled nature and tranquillity and everything that cottage country was meant to be.